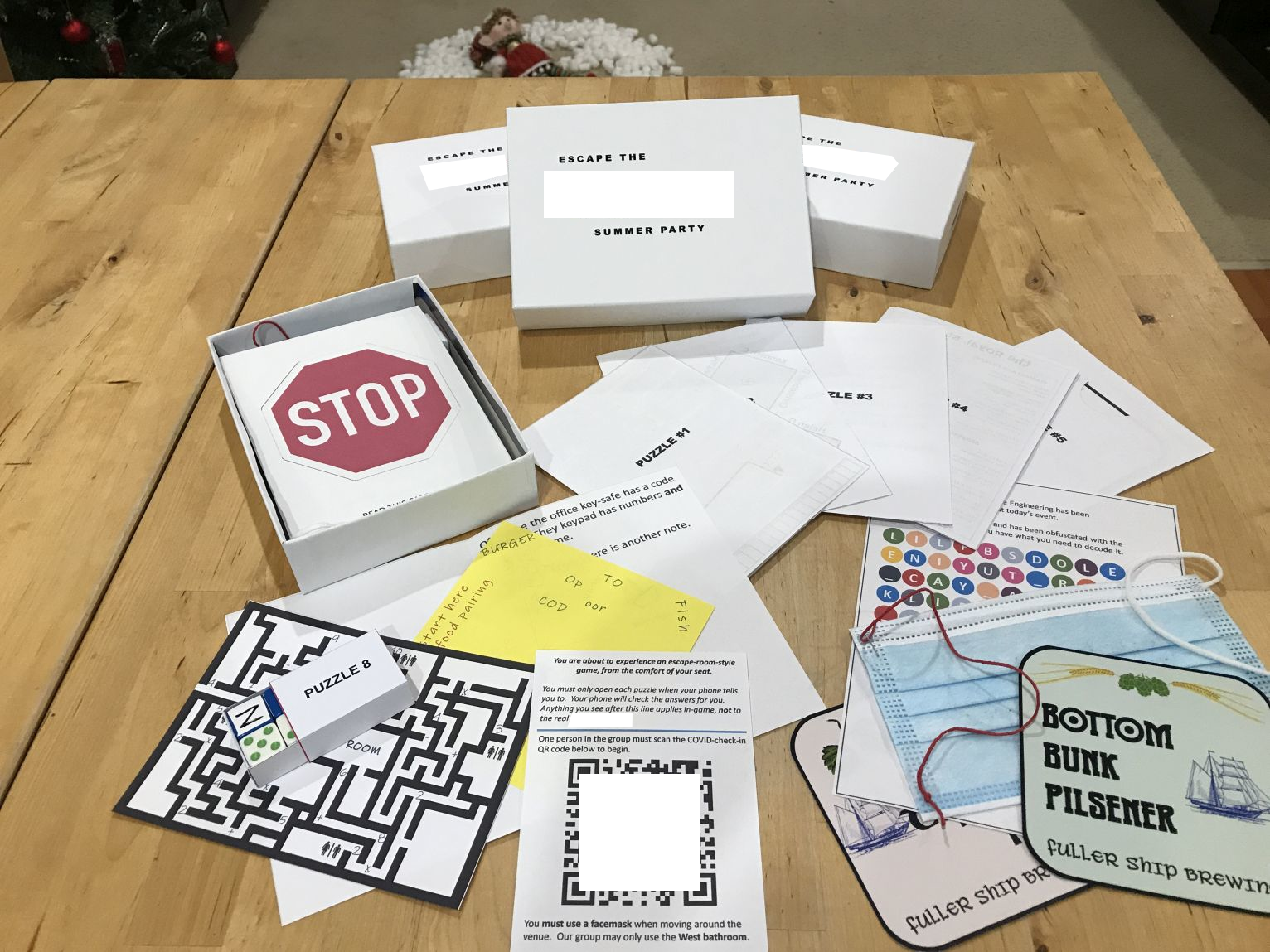 As alluded to in this post, I put together a boxed escape room for a Christmas party that would have otherwise been just a pub lunch. At least we were out of lockdown enough for that.

This will be a summary of what went into that escape room project, including seven of the puzzles.

The puzzle had a loose story of ‘you are at this party, but the staff are hostile, plus there are COVID regulations to deal with.’ The story was not as important as the puzzles – this was after all a social event for people who were just expecting a few beers.

A small boxed escape room doesn’t usually have space for physical locks, keypads, etc. Another method is needed to check answers. In this case, I built a self-contained interactive webpage using Twine and hosted it here. The first item in the box was a QR code (in-game as a COVID check-in) linking to the Twine page.

Twine has a bit of a learning curve to it. There may have been some better options – maybe there is a wordpress plugin that does what I wanted, but I could not find it at the time.

Because the Twine app was checking the answers, I was not limited to thinking in four-digit codes, like several of the games on the market. Several of the answers were free text. It was important to make sure the users are told exactly what to type in – no interpretation or parsing needed. They were verbatim copying text that they had found. The Twine app was made to check the answers in a case-insensitive way.

The puzzles themselves were each on a folded paper. In some cases, extra components were folded inside. The papers were designed in Powerpoint. This allowed me to keep and manage a consistent style and layout. Plus the tools for drawing simple shapes were very handy.

The boxes were from EXIT boxed escape rooms that I’d completed and kept. A4 full-page stickers were just big enough to re-wrap the outside with my own design. Mostly white to keep it simple. I did have to add tape to the long edges, to keep them from lifting off.

Summary of the puzzles

Puzzle 1 – How do you even get to this place?

The first puzzle is to get the gamers to start using various contents to solve the puzzles. This was a map with the route to the venue marked in red, with a scale alongside. The premise being that the boss wants to know how far the venue will be.

The solution is simply to use the red string from the facemask to trace along the route.

This puzzle combines a few things:

Here, ‘in order’ means alphabetical order and ‘contact tracing’ means to draw the path around the tables. The drawing will show a number. BUT it will be gibberish without using the facemask. Hidden in the pleats of the facemask were instructions to skip certain staff members. Hence, the gamers have to ‘use the facemask’ in order to get the answer.

This one is a lesson in patience. Plus it’s something uniquely Australian. The staff have been mistakenly given the alternative drop menu. (This is where a party is catered by having two different dishes – say chicken and fish – and these are handed out to every other person: chick, fish, chicken, fish, chicken, fish. People can swap to get what they want. Apparently this is only a thing in Australia.)

In this case the ‘alternate drop menu’ was two bits of paper which form a complete menu when read alternately from each paper . It concludes with a note that the gamers must use the name of the booking agent in order to see the a la carte menu

This name is ‘hand’ written on the back of the menus. Also in alternating format.

Now the guests have the a la carte menu, they have to find the special meal option for that one person. They have been given some access cards for this.

The premise is weak, but the puzzle was fun. Position the food icons on the cards over the words on the menu and read the words through the holes in the cards

This was made easier by having the menu quartered into rectangles the same size as the cards themselves. For a more hard-core audience, I would make the placement more arbitrary.

Another slightly weak premise for a fun puzzle. The host won’t tell the players the name of the house beer. They have to deduce it from the beermats, from the Fuller Ship Brewery.

The scribbles on the back of the mats give the clue to stack mats so that the ships (on the front of each mat) on top of each other, then flip the stack. Then the scribbles combine to name the house beer.

The beers named on the front of the mats are Top Tipple, Middle Mild and Bottom Bunk, which is the clue about what order to stack them.

This is one that the gamers all struggled with. I think more clues would have helped. They were also about three pints in at this stage though.

In this puzzle, the gamers have to solve a maze that contains an equation along the route.

That in itself is easy, as long as they remember BODMAS. However, this puzzle has a few callbacks and gotchas:

Skipping a few puzzle that are unique to my company. Near the end of the run, the games have to find a code. This is and oldie, but a goodie.

Spoiler alert: When I printed the box wraps, I put a barcode on them. Breaks the fourth wall just a bit.

So that’s what I put together this year. The key things that I think other amateur escape room designers should take away are:

I hope this article is of use to people who are considering putting together an escape room or other puzzle experience in future. Hit me up on Twitter if you have any comments. 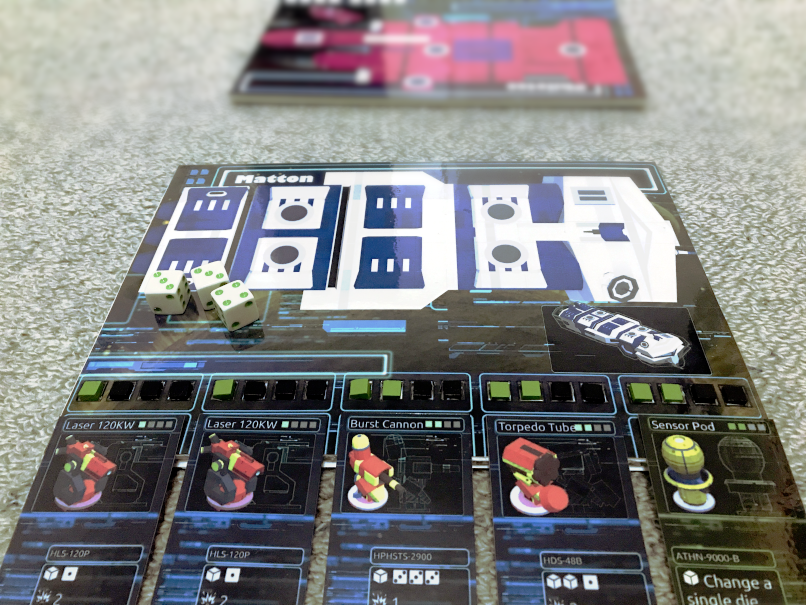 Best wishes for a successful 2021!

I spent the run-up to Christmas working on a boxed escape room game to hand out at the office Christmas party. It went down well, considering the state had just come out of a long lockdown.

However in putting that together, I ran out of time to complete the kids Christmas present game this year. Therefore, the prototype of Project-FND is on back the shelf until I get some more free time: It’s all the cutting that takes ages. The craft cutter doesn’t handle 5mm foam-core, sadly.

I want to take a moment to recommend the Asset Forge on itch.io for anyone looking to put some quick designs together for mechanical stuff like these spaceships and their hardpoints. No, I’m not getting royalties – it’s just a good tool that I want to recommend.